The Library of the DMG

Already in the statutes of 1845 collecting oriental manuscripts and printed books as well as natural objects and works of art was mentioned as one of the ways in which the society should try “to promote knowledge about Asia and countries closely connected hereto in every way and to extend participation in this in broader circles”.

An exchange of books was agreed with the Academies of Science in Berlin, Munich and St. Petersburg, the Royal Society of Sciences (Königliche Gesellschaft der Wissenschaften) in Göttingen, the Royal Asiatic Society and the Société Asiatique immediately after the founding of the DMG. Members made gifts of their publications to the society, valuable papers from the properties of scholars and bequests have enriched the library which has always been in Halle (Saale).

An agreement made in 1891 between the University Library (Universitätsbibliothek) in Halle and the DMG obliges the society, “never to move its library, which is in the building of the Royal University Library (Königliche Universitäts-Bibliothek) but keeps its own independent administration, away from Halle”. This agreement was replaced in 1925 by a contract that ensured that the library would stay in Halle for at least thirty years. After World War Two the library was continued by the Universitäts- und Landesbibliothek Sachsen-Anhalt as a branch office.

The exchange agreements with many partners in and outside of Germany that were resumed after the re-founding of the DMG in 1948 resulted in considerable holdings. This new library of the DMG, administered since 1976 by the Seminar für Sprachen und Kulturen Nordafrikas of the University of Gießen, was, in accordance with the contract made in 1993 with the federal state of Sachsen-Anhalt on the occasion of the 150th anniversary of the founding of the DMG in September 1995, integrated into the collections in Halle. Since then, the library and scholarly stocks will be maintained by the Halle University and State Library (Universitäts- und Landesbibliothek Sachsen-Anhalt) as a legal indepentend special collection within the branch library “Vorderer Orient / Ethnologie”.

The holdings of the library of the DMG are from the accession year 1991 accessible through the OPAC of the Universitäts- und Landesbibliothek Sachsen-Anhalt. For titles older than 1991 the card catalogues in the Zweigbibliothek Vorderer Orient/Nordafrika, Mühlweg 15 should be consulted. These are for the most part also available online as Imagekataloge of the Universitäts- und Landesbibliothek Sachsen-Anhalt.

Further information on the site of Universitäts- und Landesbibliothek Sachsen-Anhalt 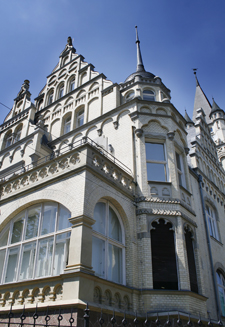 Scholar in charge of the DMG’s library